What makes up the Meta ecosystem 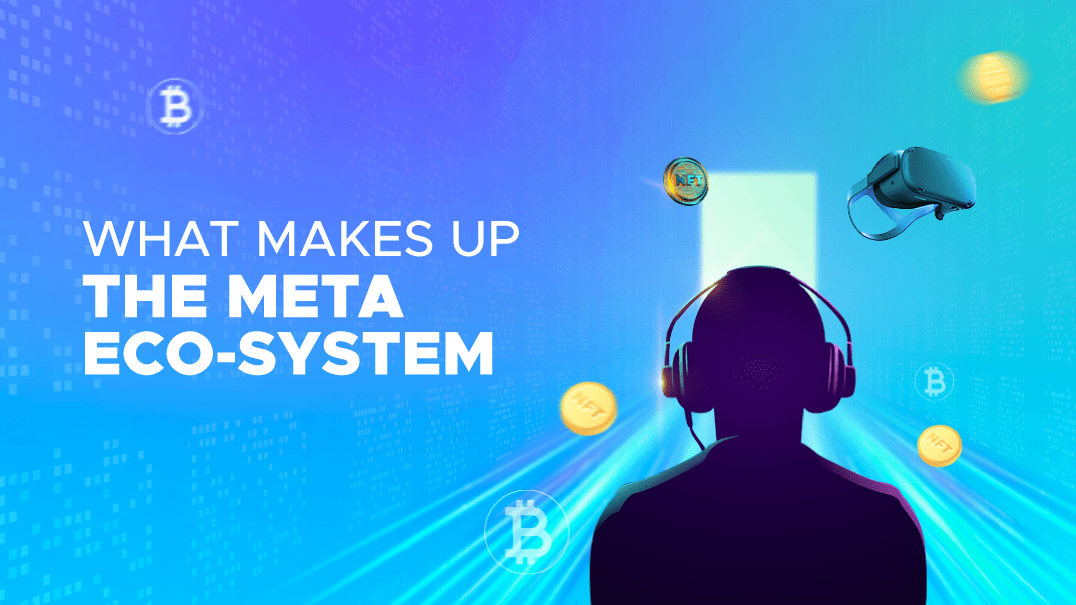 Like all the natural elements that come together with living beings to form an ecosystem, technology-driven components come together to create the Metaverse ecosystem. Although in its infancy, the metaverse has seen industry giants willing to invest heavily in Web3 technology to offer innovative experiences.

Here’s a look at the metaverse’s most essential elements.

Blockchains are primary components of the metaverse. A blockchain is a distributed database or ledger shared among the nodes of a computer network. Blockchains combine technologies such as cryptographic keys, a peer-to-peer network containing a shared ledger and a means of computing to store the transactions and records of the network.

In simpler terms, it is a database which stores information electronically. However, unlike the current method of storing information via typical databases, a blockchain’s storage is, as described by IBM, “accurate, transparent and immutable.” A single blockchain collects data in chronological order in groups called blocks. Once the storage capacity of each block is full, it is closed and linked to another blockchain which also holds data. Once data is entered into the blockchain, it becomes uneditable. Remember how you’d fill multiple notebooks in school and refer to them to find all the data in one place? That’s precisely how blockchain works. Different sectors have adapted blockchain technology, from healthcare and insurance to media and travel, but its primary role is in cryptocurrency systems for secure and decentralised transaction records.

Cryptocurrency, as the name suggests, is an encrypted currency that works only on digital platforms and doesn’t rely on banking systems for verifications. Anyone anywhere in the world can transact using cryptocurrencies, with all of the entries being stored online in digital wallets, with no physical payments involved. Crypto is minted through a process called mining–essentially a process of validating digital transactions and recording them on the blockchain network. This process, which requires large amounts of power and advanced mining hardware, essentially involves guessing a 64-digit hexadecimal number. Ultimately, this results in the production of more coins.  These coins can also be purchased through currency brokers and stored in cryptographic wallets for future use – to buy and sell assets in the Metaverse or otherwise.

Today, Bitcoin is just one of the many mainstream cryptocurrencies in use. There’s Ethereum, Tether, Binance Coin, and more.

We’ve all heard about Augmented Reality (AR) and Virtual Reality (VR), but have you heard of Mixed Reality (MR)? As one of the technologies that serve as an essential component of the Metaverse, Mixed Reality merges physical and virtual worlds, allowing objects to co-exist and interact in both environments. It isn’t just a tool used for gaming or enjoyment but is being used in the education and healthcare sector, in manufacturing and retail, enhancing communication and e-learning experiences.

All work and no play is definitely not how the Metaverse work. After all, gaming is the precursor of the Metaverse. Gaming is expected to account for more than half of the Metaverse’ market value by 2024. All you have to do is put on your VR headset, design an avatar that looks just like you and interact with thousands of other gamers in the virtual world. Gaming in the Metaverse also includes buying and selling NFT assets to enhance your gaming experience and using cryptocurrency for your purchases. That’s pretty much why everything in the Metaverse is interconnected. Most 8-16 year olds have already taken to Metaverse gaming. Think Fortnite, or the famous Pokemon Go. While online safety remains a concern in gaming, the possibilities to explore are endless.

NFT stands for Non-Fungible Token. To understand the concept, we need to understand what fungibility means. Something fungible is something you can easily exchange for the same value, without compromising on its quality or uniqueness. You could exchange a 10 AED bill for another 10 AED bill, and its value wouldn’t be compromised. In the case of NFTs, however, an NFT in exchange for another NFT may not consist of the same properties and have the same value. NFTs are mostly associated with creative works that are tokenised and sold on the internet. These include digital art, videos, games, clothing and accessories for your avatar and much more. NFTs are most commonly hosted on a cryptocurrency network, like Ethereum, or even on a Blockchain, where tracing and verifying the owner is easy, but his original identity isn’t compromised.

The Internet of Things has been around for a while. As the name suggests, it connects everyday ‘things’ to the internet, allowing them to access data stored on the cloud and act as smart devices. This could be anything – your vacuum cleaner, smartwatch, thermostat, car, and many more. To give you an everyday example – you command Alexa to switch on and switch off your lights. In doing so, you connect its capabilities to an everyday object. Similarly, over the years, multiple devices have been connected to the cloud, and all of the computing devices, together with the technology associated with them. This is what’s called the Internet of Things. Very soon, the Metaverse will form a 3D interface for IoT, with the latter allowing the former to interact with the real environment, which has already given them the name ‘tech twins’.

While these are some of the most important components that have already become part of the metaverse and will soon be more evident, there’s a lot more that makes up the metaverse. If you got to this blog and don’t have much of an idea about what this unique universe is, we’d recommend reading our first blog about what the metaverse is.

Unravelling more in our next blog. Stay tuned! 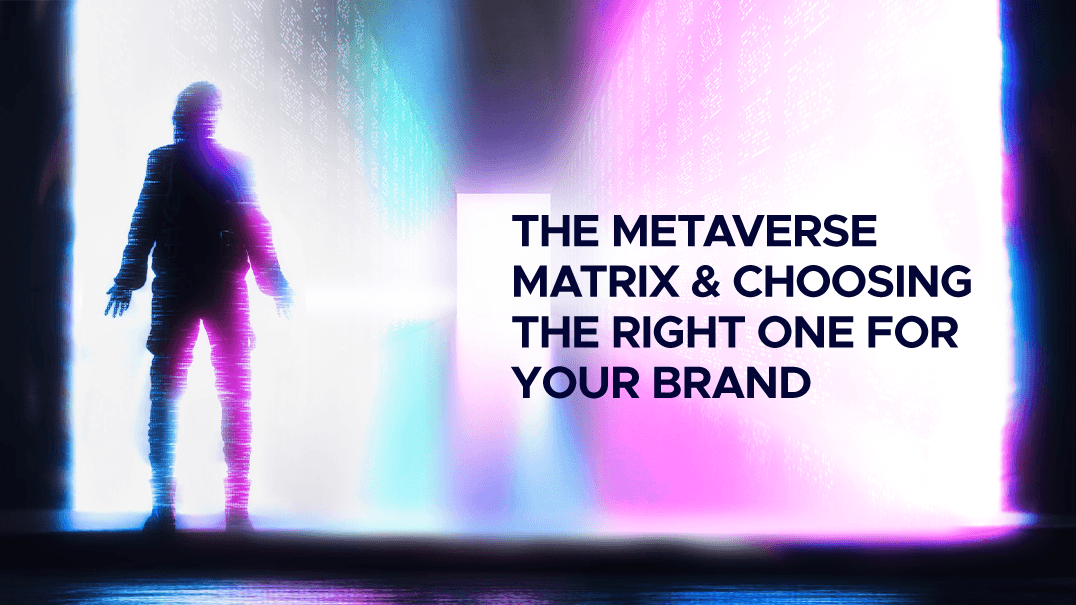 The Metaverse Matrix and choosing the right one for your brand

If you’ve stuck around with us since a while you’ve probably read our Moonbox Talks Meta series of blogs. If you haven’t, we recommend reading all about what the metaverse is, what its ecosystem is all about, and which global brands have joined the league so far.  In today’s blog we’re going to be delving into the types of metaverses that exist. 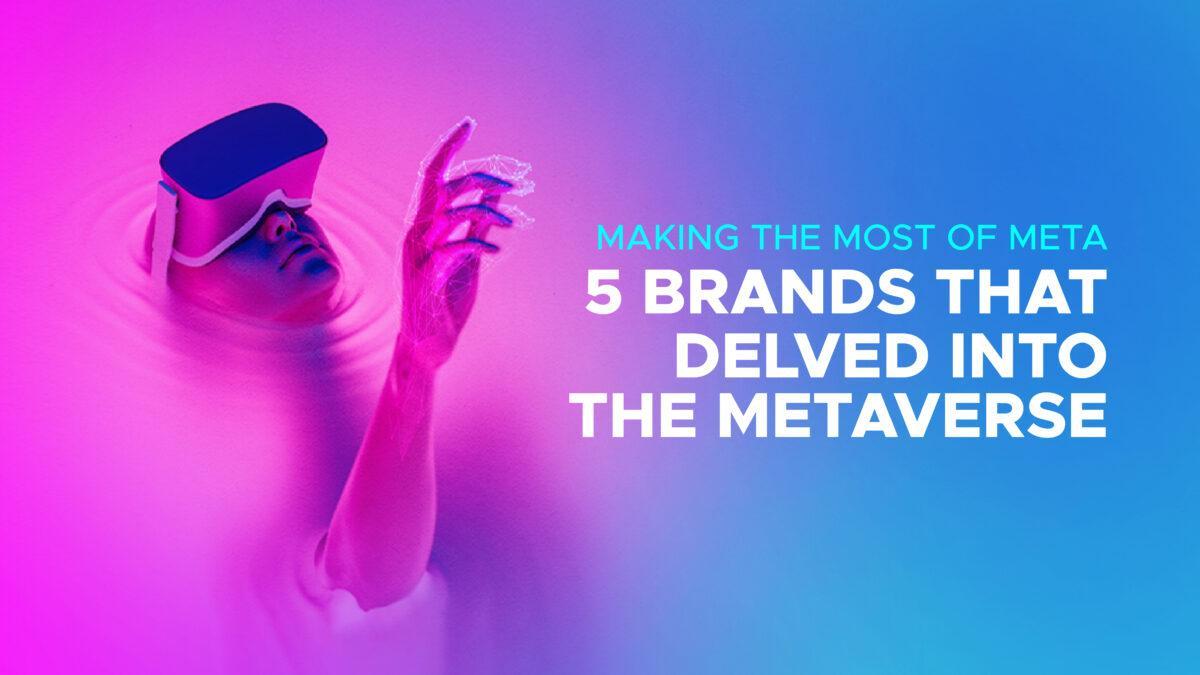 Making the most of Meta

The Metaverse is here with a big bang and brands have already started immersing themselves in this phygital world. To know what the Metaverse is, check out our previous blog. In order to create one-of-a-kind experiences in the virtual world and garner some never-seen-before engagement, some of the top-notch brands have ventured into the Metaverse and created remarkable experiences that left a lasting impression.